Partial/incomplete rating. This is our overall editorial review rating, calculated based on in-depth independent research, testing, and user-reported statistics. Learn more about our editorial review process.

×
An aggregate user rating, calculated based on real reviews from OnePulse Members and Clients. See all of the individual ratings and reviews below!

OnePulse is a crowdsourcing platform that aims to make market research quick, easy, and rewarding. With a simple 3-question survey format, researchers can use the platform to easily gather audience-specific insights while panel members can use it to quickly earn extra cash for their opinions.

Who Is OnePulse For?

If you're a business owner, using the OnePulse website can help you gather information about your target audience. In less than 15 minutes, you can create 3-question surveys and get honest opinions from over 600,000 consumers.

On the other hand, if you're looking for extra cash, you can download the OnePulse app and answer 3-question surveys to earn money.

How Does OnePulse Work?

There are 2 types of users on OnePulse: Members and Clients.

Here's how OnePulse works for each of those user types:

Members (aka consumers, earners) can download the OnePulse app, sign up, and provide their interests in order to get matched with relevant surveys. Surveys are 3-question each and take less than 1 minute to complete. As you earn points and coins, you'll level up, earn more, and eventually be able to cash out.

Clients (e.g. business owners) can sign up on the OnePulse website, choose a suitable pricing plan, and start publishing 3 question surveys (aka Pulses). When creating a survey, clients can pick from 8 question types and over 65 different audience filters.

After creating and sending out a survey, results will begin to arrive in real time (usually within 15 minutes). You can then ask follow-up questions, download your insights, and more.

Sign up for Swift Saturday Financial, a quick weekly newsletter that features platforms (and other ideas) to help you make more money and manage your money better! 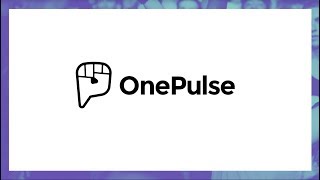 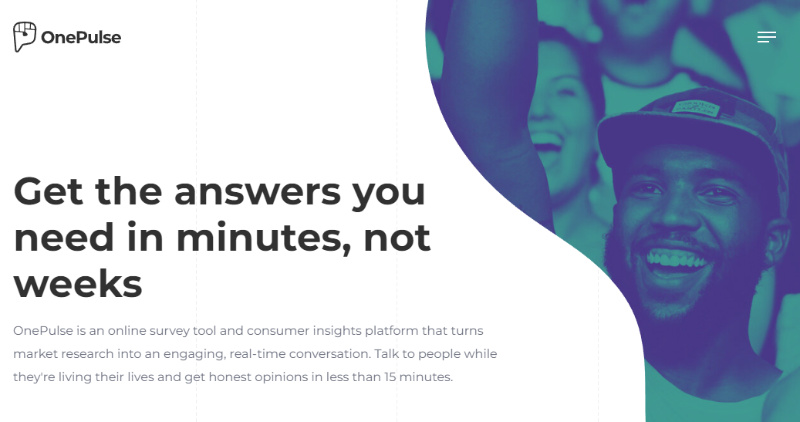 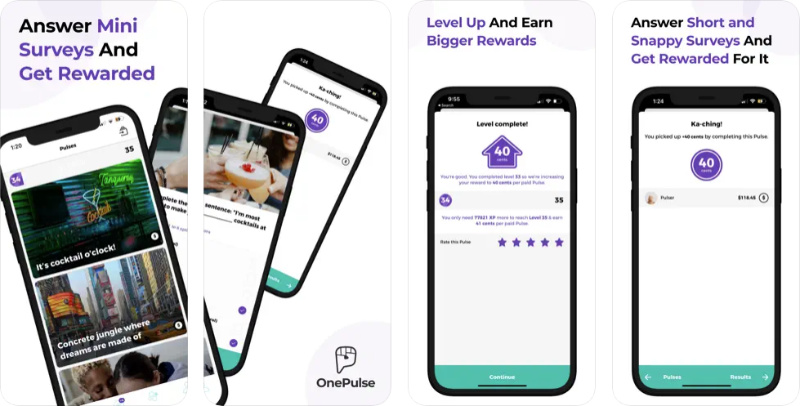 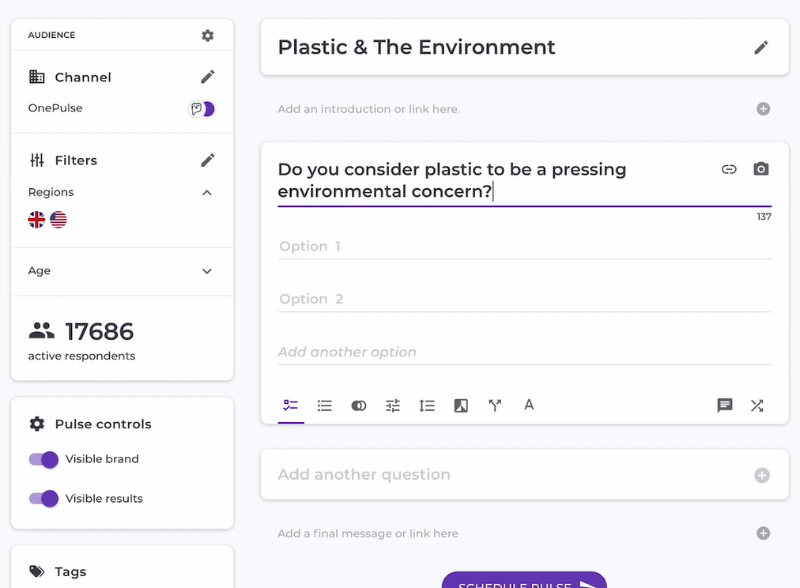 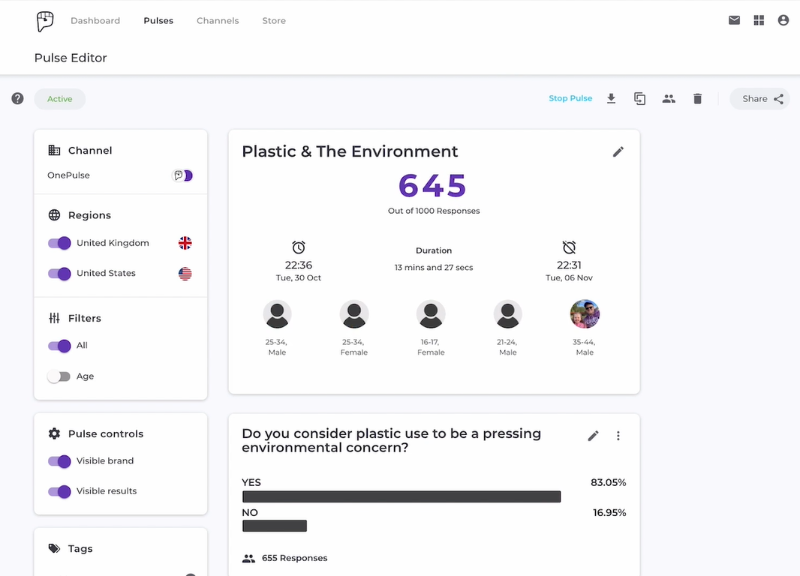 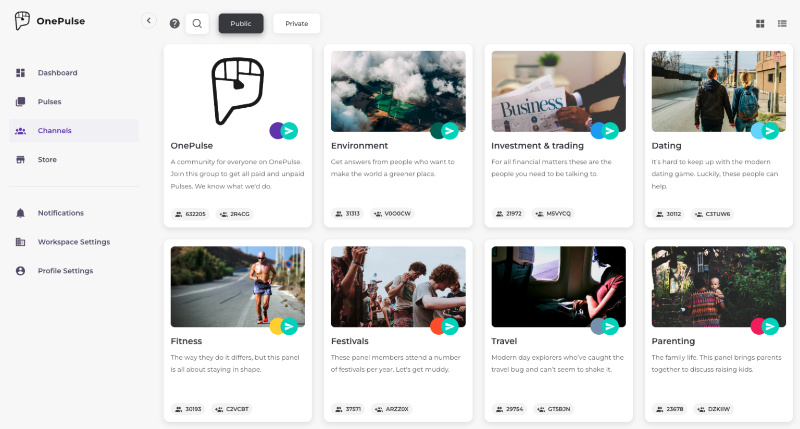 Partial/incomplete rating. This is our overall editorial review rating, calculated based on in-depth independent research, testing, and user-reported statistics. Learn more about our editorial review process.

Is OnePulse a Good Way to Make Money?

This section is incomplete. Showing what we have so far...

Write Your Own Review!

Learn how to make money with paid surveys. This guide includes the best surveys sites and apps, tips to help you earn more, FAQs, and more!

GPT sites allow virtually anyone to 'get paid to' do simple tasks. But are they as good as they sound? Here's everything you need to know.

Having trouble increasing your earnings from paid surveys and GPT (Get Paid To) sites/apps? This free income tracker will help you optimize your time and earn more money.

Are paid surveys safe? Are get-paid-to sites, in general, safe? Sort of. Learn how to protect your privacy and data with these safety tips.

How to Spot Survey Scams & GPT Scams (in 10 Steps)

10 simple, quick steps is all it takes to separate survey scams and GPT scams from legitimate paid surveys and money-making opportunities.

😁 100%
of Members recommend this platform

Anonymous
United States
User for 2-3 years
Verified Redditor
Total Earned: $320.00
Reviewer Source
?
We invited this reviewer to leave an honest review and offered them a small incentive as a thank you.
#15381

Would recommend it to basically anyone

In general, I really enjoy OnePulse! While I do have a few very small complaints about the app, I've been really impressed with it overall, and it's been a nice way to earn a little extra money. I would definitely consider it to be one of my favorite money-making apps/sites. I like that it's relatively easy to increase the amount of money you are earning, and I also like that earnings seem to accumulate very quickly. They are also very reliable, and I have never had any issues whatsoever where getting the money I have cashed out is concerned, which is more than I can say about some of the similar apps and sites I have used. I also like that it has a bit of a different feel than most survey apps and sites, and seems to be somewhat more interactive.

I would recommend it to basically anyone who is looking for a relatively quick and easy way to make a little extra spending money. It would be a great option for anyone who wants something that they won't have to spend a great deal of time doing, as all of the surveys on OnePulse can be completed very quickly (usually under a minute), as well as anyone who would like something that is a bit different from what you would usually find on a survey website or app. I would also recommend it just as a sort of fun app to have, as I think it would be kind of entertaining even if it wasn't intended as a way to make money.

They have always been very reliable. I have had some small issues with most of the other money-making apps and sites I use, but I don't think I've had a single problem with OnePulse the entire time I have been using it.

Cashing out is instant, and I have never had any issues with getting the money I have withdrawn.

The fact that it's an app makes it very convenient, and it's easy for me to use while I'm away from home and have some downtime.

I like that they send you notifications every time there is a paid pulse available, so it's harder to miss out on an opportunity to make money.

The surveys are very fast and easy, and they're never more than three questions long, so taking them is pretty much always convenient.

They pay directly to PayPal. I don't mind sites that offer gift cards as long as there are multiple options that I will actually use, but I generally prefer it when they just directly give me money.

The overall setup of the app is kind of fun, and it's set up almost like a social media site. In that regard, it feels a little underdeveloped (for example, there's a system where you can add other users as friends, but there isn't very much that you can actually do as friends), but it's still nice and very original.

Most of the pulses give you an option to see the results at the end. Other users' responses are displayed in a bar graph or pie chart. It's really interesting to be able to get an idea of what other people are saying.

I usually enjoy the topics of the pulses, because many of them pertain to current events (although there are also quite a few paid ones that focus more on product ideas).

They seem to make a good effort at engaging with their userbase. They have Instagram and Facebook profiles, and following one or both helps users to find links to extra paid pulses, as well as opportunities to enter contests.

I'm kind of impressed that, even though there are many unpaid surveys on OnePulse, they still offer a large number of paid ones as well. I feel like most sites that offer both paid and unpaid surveys would probably offer mostly unpaid ones, but I get paid pulses almost every day, and the money adds up quickly.

In the last year or so, they have changed the minimum amount of money to cash out to $20, and you are only able to cash out once per month. It used to be $5 a day, which was a lot nicer. Currently, I have a balance of $47.82 that I cannot yet cash out because I have to wait until the middle of next month just to get another $20. I think it would nice if they would improve this at least a little.

Sometimes when I open a paid pulse, it will time out and/or fill up while I'm in the middle of answering the questions. I know they have to have a limit for how many people can take each one, but I feel like there would probably be a better way of doing this. It's very frustrating to be in the middle of working on something and then be told that the survey is full, and I would imagine that this probably encourages some people to rush through the questions and give less useful responses. I think it would be nice if they could only offer it to the exact number of people to begin with, and then send it to more people later as needed (or something like that).

Every so often I notice some degree of bias/loaded questions in certain surveys, which kind of annoys me. It can be kind of difficult to answer certain questions when the person asking the question is already assuming that you agree with a particular thing, especially when they don't always offer an option that would reflect that/the ability to write your thoughts in a text box. They do have a system for rating the pulses after you take them, but I'm not sure if it really accomplishes much, and there isn't a way to give specific feedback.

All the pulses you take in the app give you experience points, which help you to progress to higher levels of pay. On level 34, you get 40 cents per paid pulse, but the number of points needed to advance beyond this is MUCH higher than on any other level. I have attempted to figure out how long it would probably take me to actually get to the next level, and it's something around eight years! I totally understand the need for a cutoff point, but it seems kind of strange to me that they don't just explicitly state (at least as far as I have seen) that 40 cents is the most you can earn. Each time I complete a pulse it still tells me I will earn 41 cents at level 35. This is a very minor complaint/observation, though! Certainly not a big deal, just odd.

Especially when you are just getting started, answer as many of the unpaid pulses as possible so that you can quickly increase the amount you are earning per paid pulse.

Try to be as fast as possible when taking paid pulses, but also make sure to given accurate answers.

When you cash out for the first time, set a reminder on your phone so that you will remember to check your balance and cash out again (if possible) on the soonest day you will be able to.

Fill out as much of your profile information as you possibly can so that you will be more likely to receive pulses that are relevant to your life.

Whenever possible, make sure your phone notifications are not silenced so that you will be less likely to miss notifications for paid pulses.

Anonymous
United Kingdom
User for 6-12 months
Verified Redditor
Total Earned: $80.00
Reviewer Source
?
We invited this reviewer to leave an honest review and offered them a small incentive as a thank you.
#15380

It's a easy way to make money

It's really good as surveys are quick and frequent

The more pulses you finish the more you are rewarded