There's frugal living, and then there's extreme frugal living. The difference? One is completely reasonable, and the other takes it to the next level.

See, there's a point (in my opinion) when extreme frugality just gets a bit out of hand. I completely get trying to make the most out of every penny but some things just seem to sacrifice too much for too little gain.

In order to see how far people would take it, I scoured the web for the most extreme frugality tips I could find. Some of the things I found were pretty surprising (and even possibly dangerous).

Oh, and I'm not just here to hate on these extreme ways to save money, I just think there's a better solution than pinching your pennies until they snap. I'll talk about that more at the end of this post.

What Is Extreme Frugality?

Extreme frugality is exactly what it sounds like. Instead of sticking to the usual money-saving tips like everyone else, extremely frugal people find ways to save money that most people would never even consider.

In fact, even if you think you live an extremely frugal life, you're probably not taking it anywhere near as far as some of the extreme frugal living tips below go.

So, the question becomes…why would anyone live such an extremely frugal life anyway? Well, I think there are two main reasons:

If you're person #1 and you learned how to live super frugally just because you love being resourceful, keep doing you! As long as you're happy, who cares what anyone else thinks.

However, if you're person #3 and you've learned how to be extremely frugal just to get by (but you're completely miserable), keep on reading until the end of the post. I'll talk about how you can escape the extreme frugality life for good.

But first, let's get into some of these tips to see what extreme frugal living is really about…

Get ready to be mind-blown at how far some people go to save a couple of bucks.

This one is actually quite popular and I've been tempted to try it myself, but never took the leap (or dive, I guess?).

Basically, people will go to grocery stores to find tossed out food and they'll take it home for themselves. I've seen people get some pretty good hauls doing this too:

Honestly, it's mind-blowing how much fresh food gets thrown out every day. I've seen it myself too because I worked in a Superstore deli and I was constantly told to throw out perfectly fine food just because it was past its date.

Oh, and it's not just food either. I've also seen people have some pretty good finds dumpster diving at electronics stores (e.g. EB games). My girlfriend told me people do it at makeup stores too.

2. Living in Your Car

This is another one that is pretty common and not too extreme. It also has the potential to save you the most money as you won't have to pay rent! Just shower at the local gym and you're good to go.

If you want to really embrace car living, join the RV Life movement and live in a small RV or van. It'll be a lot better than living in a coupe. There's actually a skateboarder I follow on Instagram that lives in a refurbished ambulance which I think is pretty cool.

You could also potentially turn this into a side gig (if you wanted to) by starting a blog. People love reading about RV extreme frugal living. I've seen some RV bloggers making over $100,000/month (not a typo).

Not sure how to get setup? Learn how to live in your car from MorningChores.com.

This just seems super over the top for the amount of savings you'll actually get back. I also don't know if it's very hygienic and I'm too afraid to ask my dentist.

If you really don't want to pay for floss (and your dentist doesn't give you free packs) you might just be better off investing in a water flosser.

4. Don't Wash Your Makeup Off

I'm gonna take a guess and say this would probably be awful for your skin. I can see the appeal though, it would save you time AND you wouldn't need to buy makeup wipes as often.

If you're someone who wears contacts I'm sure that you could just leave those in all night as well. You might go blind but hey, savings.

This is a pretty common one. There's an old saying that goes something like, “If it's yellow, let it mellow. If it's brown, flush it down.” That's the soft version.

The real hardcore people treat their toilet like an outhouse and at most flush once a day. Doesn't matter if it's brown, yellow, chunky or soft.

Cletus from the Simpsons isn't the only guy hunting for fresh roadkill to eat. For example, this Michigan family eats nothing BUT fresh roadkill. That includes deer, squirrel, pheasants, and other tasty roadside snacks.

I could see myself possibly eating a piece of roadkill if I was in survival mode or if someone fed it to me without me knowing, but otherwise, this one's too extreme for me.

7. Have a Family Cloth

Reusable toilet paper (AKA “The Family Cloth”) is when you use old rags, t-shirts, and other pieces of fabric when using the washroom instead of disposable toilet paper. After you use some you wash it and reuse it.

According to Kelly Reynolds, a public health researcher, doing this is actually pretty risky health-wise unless you follow some strict protocols (which most people don't). I'll stick to my TP for now.

8. Live in a Storage Unit

Similar to living in a car, living in a storage unit is another extremely frugal way to save money on rent.

I saw a video from a guy who did this and he actually had a pretty decent setup in his locker. He had running water, electricity, a bed, a TV, and more. The only problem is that living in a storage unit is illegal, and the guy in the video ended up getting kicked out after 2 months.

Pee has a lot of nutrients that are great for plants so if you want to save some water and money, pee in containers and save it. It's a bit gross but I'd say it's less gross than the family cloth idea.

For me, this one isn't actually that extreme. I actually take cold showers just for the benefits but it's also a good way to save money as you won't have to heat any water.

After doing it for a while, you actually get used to the cold pretty fast. It will surely wake you up in the morning too, so maybe you'll save some money on coffee as well.

You could also just shower less to save money, that would be pretty extreme.

If I see a moldy piece of bread, you already know I'm tossing it. Extremely frugal people, however, well, they'll just cut around that mold and it's good to go, right?

Well… maybe not. Although you can't SEE the mold on the rest of the bread, mold actually has “roots” that have probably spread throughout the entire piece. There's a good chance it's even spread to other “clean” pieces of bread in the bag as well.

To see what I mean, just watch this video on mold. Also, check out this article which lists some food you actually CAN safely save from mold.

The Solution to Extreme Frugality

Even if you could follow some of the extreme saving tips above, how long could it really last? Some of them are just so extreme that I don't know how you couldn't get burnt out eventually.

Now don't get me wrong:

I can see why some people resort to the extreme frugality tips above. It's resourceful, it can help the environment, and the savings are there. If you're doing any of the things above because you actually want to and they work for you, then I see no problem with that. You do you.

However, if you're doing some (or all) of the things above (or you're thinking about doing them) just to survive and NOT because you want to, I don't think you should have to live that way forever. There are other (better) ways to save money on a low income.

Here's the catch though:

You can only save so much.

After you hit that savings limit, The only other way to improve your finances is to increase your income. It will take some time, but even making an extra $100 a month will make a huge difference, especially if you're working on paying off debt.

That's why I have an entire section around making money on this blog. To me, it's an essential part of personal finance and financial freedom (learn more about what I mean on my start here page).

Check out these posts to learn about how to increase your income:

I think saving money is great, but there's a limit to the amount you can save. Even if you follow all of the extreme frugal living ideas above, you'll still hit a ceiling eventually.

If you really want to reach financial freedom and possibly retire early, you need to learn how to increase your income. At least make sure to start building passive income sources with your savings as well.

I want to hear from you:

What do you think about these extreme frugality tips? What's the most extreme thing you've ever done (or heard of someone do) to save money? 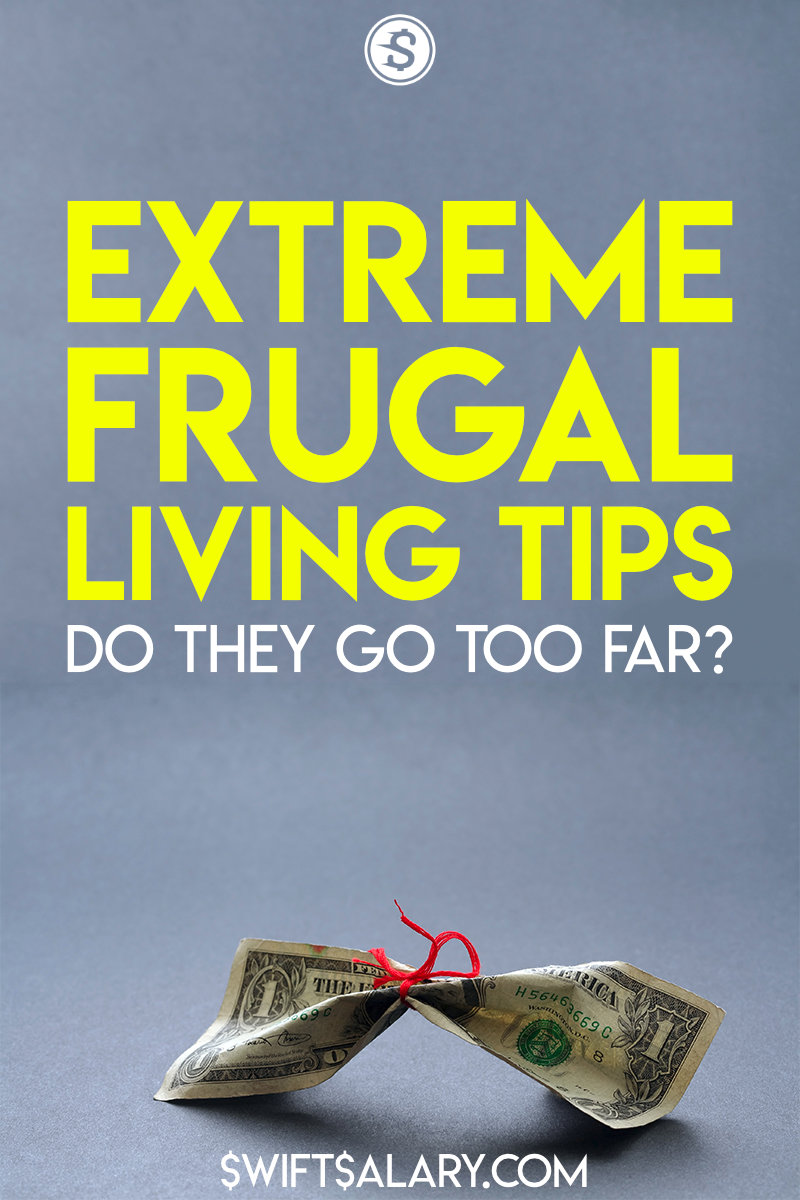