Heads up! There may be affiliate links below. If you click one and make a purchase, I'll earn a small commission at no extra cost to you. Thanks for your support!

This morning as I write this income report, I'm wondering:

Do any other bloggers get nervous while writing these things?

I've written seven of them now and for some reason, I still get nervous when I write them.

It sort of reminds me of back in the day when I used to avoid looking at my bank account after knowing I'd wasted money. I was afraid to see the damage.

I guess with these income reports I get nervous because I'm afraid I won't hit my goals. I'm afraid of letting myself down.

Plus, if I fail, it's out there for the world to see. That definitely adds some pressure.

Anyway, I'm sure I'm not the only one who feels this way. Releasing income reports isn't always easy but writing them is a bit like a cleanse. It helps me realize what got done, what I could have done better, and where to focus on for the next quarter.

And with that, let's get into the report!

New Things That Happened in Q2

As far as personal things go, I moved houses in the middle of July which was exciting but also quite time-consuming. I'm basically all settled in now though!

Also, a small win I had was that I did my first account reconciliations this quarter in Zoho Books. That sounds super boring, but I won't lie – I found it pretty exciting. Nerdy, I know.

Here are two big wins I had:

I've been using HARO (help a reporter out) for a while now as a source, but it wasn't until April that I used it as a reporter. I sent in a query to get some insight from parents on how to work from home with kids.

The post turned out really well and I got some great responses. Not sure when I'll submit my next HARO query for the blog, but I'm sure I'll be using it again at some point.

Another first! This one kind of happened spontaneously. I was searching the web one day for money-making opportunities and such when I came across Amazon Mechanical Turk. I already knew of the platform and had used it myself in the past, but this time I found someone who was earning a full-time income with it, which I didn't even think was possible.

So, I reached out to him, asked if he would be willing to write for the blog, we agreed on a price and the rest is history. Check out the full MTurk Review and Earning Guide to see how it turned out!

All income and expenses are recorded in Canadian dollars. Income is based on money that has actually hit my bank account.

Here's what I actually earned from:

Overall, really happy with this quarter. Hit over $2,000/month before expenses which was a big goal of mine at the beginning of the year.

So what made this quarters earnings so good?

Well, because so many are either bored at home or out of work right now, my site's organic traffic increased quite a bit. That led to more ad revenue and affiliate conversions.

How long the increase in traffic will last is what I'm not so sure about.

Either way, I'm glad I had content up and running on my site before all this went down. It's now paying off nicely.

(There's always that voice in the back of my head though saying I could have produced even MORE content, which is always going to be true. Can't dwell on it though.)

As I mentioned above, this is the first quarter I've ever paid for a writer, and it's the biggest expense on the list. I paid $0.15/word.

For my first paid writer it did feel like it cost me quite a bit, but the content I got out of it is really good. So there's not a lot to be unhappy about there. We'll see if the investment pays off!

Overall I'm up $1471.54 or around 33% compared to Q1. Pretty happy with that considering I only released a couple of blog posts this quarter!

So yeah, as I mentioned above, my traffic increased quite a bit this quarter mostly due to the current circumstances in the world.

What's funny is that a lot of my posts related to survey sites gained a lot of traffic this quarter vs. previous. For example, traffic to my Qmee Review increased by 197% compared to Q1. Traffic to my Top Survey Sites post increased 167%.

That's another reason I'm a bit worried the increase in traffic won't last, as once things start going back to normal and more people find jobs again, searches for money-making opportunities may slow down.

But, that's why I also talk about money-management on my site! I need to work on more content in that area though.

Started April with 1,126 subscribers and ended June with 2,316. That's 1,190 new subscribers for the quarter (doubled my list!) and an average of 396 subscribers per month.

Most of the list growth is still coming from my Free Make Money Online Course which you can sign up for on this page.

I still need to do a lot of work on my email list. Things are a bit unorganized right now, and I'm still working on updating my free email courses. I also have other email series being worked on.

In terms of monetization, some say you should earn at least $1/subscriber/month. I'm nowhere near that yet. I'm a bit more focused on making sure my emails are actually worth hitting people's inboxes first.

Back in school, I'd usually hold off on working on a project until the last minute. I was a procrastinator, but I always usually ended up finishing my work on time anyway. The crunch time would just give me a burst of energy to get shit done, y'know?

I made goals in my Year Two Report that I haven't been hitting recently, so I've got to play some catch-up.

That means I need 40 new pieces of content (~7/month) by the end of the year now.

That kind of hurts to write.

I don't feel I've been slacking either, but maybe not putting my focus into the right areas. I have several posts that are half-written that I need to finish. It's a bit ridiculous.

I also wanted to upload 12 new Youtube videos by the end of the year. So far I haven't uploaded any. Oof.

I think I can still hit both of these big goals though.

Ok, so there are typically two things that I've discovered about myself that can really hold me back:

To make sure these things don't hold me back this quarter, I've done something that I've never done before. I've created a list of article and YouTube video ideas to release in the next two quarters. 40 blog post ideas and 12 YouTube video ideas.

While writing this income report, I split those ideas in half to create a Q3 Content To-Do List.

Ideally, I'll go down that list and get an idea finished before moving onto a new idea. That's the plan, anyway.

I'm going to try to set hard deadlines for my content ideas as well. That way I'll force myself to get things out even if they're not perfect. I won't just release unfinished content, but having deadlines should help me waste less time.

In the next income report, we'll see if any of this actually helps.

I know it won't be easy as I have other goals as well right now (primarily updating my email courses) but I'm prepared for the challenge.

A Note on Perfectionism

I feel like I've written about perfectionism a lot in my income reports.

Trying to make things perfect is the ultimate trap. Unfortunately, it's also a really easy trap to fall into.

If you're a content creator, it makes sense to want your content to be perfect. Mistake-less. UBER valuable to everyone who sees it.

The problem is…that's not even possible.

You can never please everyone with your content. Perfect or not, there will be those who enjoy what you do and those who don't.

For that reason, instead of trying to make things perfect, you should focus on making things really good.

The difference between really good and perfect?

Really good = Content that covers a subject fully and with some style. May have small spelling mistakes or the occasional weird sentence, but it's complete. You can't think of anything else to add to it.

Perfect = Content that is already really good, but you insist on tweaking it over and over again anyway for whatever reason (e.g. you're not sure if others will like it). At this point, those tweaks you're making are probably just disguised procrastination.

Once your content is really good, get it out there. Bite the bullet and see how people react to it.

If your content helps even just a single person, you've won.

On the other hand, if you would have waited and kept making tiny tweaks to try to make your content “perfect” you would have missed out on helping that one person.

That's the detriment of perfectionism.

Want to Start a Blog?

You might not want to after reading about my struggles above, but if you like the idea of:

Then you might be a good candidate for starting a blog.

This is something you can do alongside a job, it doesn't cost a lot to start up, and if you have a steady income already, there's really no pressure to grow super quickly.

And that's the perfect situation to be in with blogging. Because it takes time. Lots of it. You'll have to spend many nights after work, or mornings before, grinding it out, and you may not see a return for months.

That's why if you're going to get into blogging, get into it because you like the idea of creating content, helping others, AND making money – not just making money.

If that sounds like you, learn how to start a blog by taking my free email course:

The course will show you how to pick a niche, how to find ideas for what to write about, how to get traffic, and of course, how to make money blogging.

Hope to see you in there!

Now that we're into the second half of the year (and what a year it's been), it's time to end off strong. I feel these last two quarters are going to be extremely important for Swift Salary's growth in 2021, and I really need to step up my game.

If you're a blogger reading this, I encourage you to come up with a content plan for the second half of the year too. We can be in this thang together.

Continue the journey by checking out my 2020 Q3 income report. 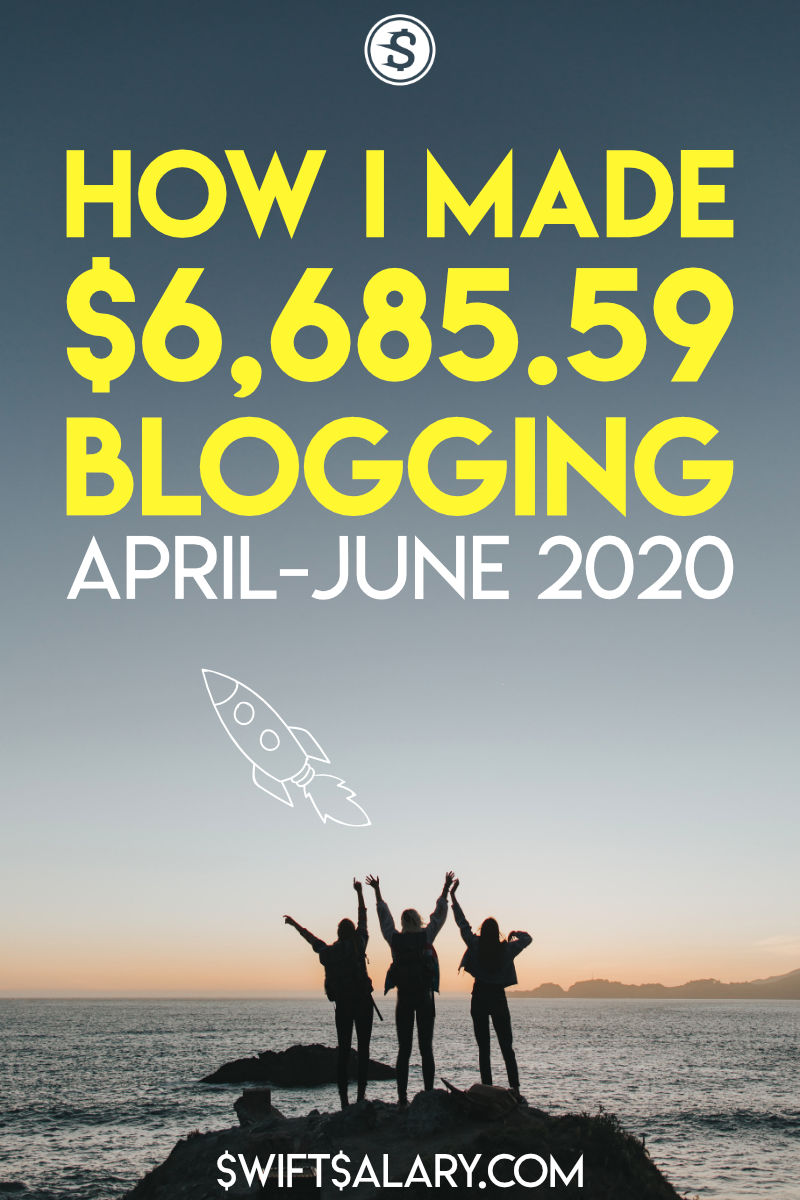 Join Swagbucks and start getting paid to search the web, answer polls, shop, and more!

Just for signing up, Swagbucks will give you $5.

If you want to learn more you can check out my full Swagbucks review here.